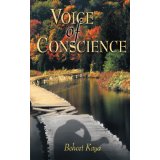 ~~~Author BIO~~~
Author Behcet Kaya, in his first novel VOICE OF CONSCIENCE, transports his readers to the land of his birth, bringing to life all of the sights, sounds and smells of a place steeped in centuries of tradition and exacting customs. Calling upon his own life experiences, he weaves a story of love and revenge that plays itself out on three continents.
Kaya was born in northeastern Turkey. Growing up in a small village with long held traditions, his rebellious and creative nature emerged at an early age. Leaving home at fourteen, he traveled first to Istanbul and then on to London. His dream was to complete his high school education and then a college degree in engineering. While at Hatfield Polytechnic, Kaya made his first visit to the U.S. as an exchange student with the BUNAC. He made the move to the U.S. in 1976 and became a U.S. citizen in 1985. While living in Atlanta, Georgia, he followed his creative yearnings, attending the Alliance Theater School and studying at the SAG Conservatory of Georgia. Kaya and his wife moved to Los Angeles, where he continued his studies at the Roby Theater Company and the Shakespeare, A Noise Within Theater Workshop.
Along with acting, writing became a natural outlet for his creative yearnings. He has published several short stories and his second novel, MURDER ON THE NAVAL BASE, was recently released. He is currently working on a sequel to VOICE OF CONSCIENCE, titled 'ERIN'S STORY.'
Posted by Author Geri Ahearn at 4:26 PM